I love these lyrics. They are a public domain poem by Walter de la Mare and are beautifully profound. Eddie wrote a nice, easy jazz waltz.  The chord progressions are great for improv and all of Eddie Russ’s songs reflect his blend of blues, jazz, and his laid-back, gentle worldview. I met Eddie when I joined the faculty at Thomas Jefferson College where he was teaching jazz piano. A student of ours brought me his composition “Zaius.” And after I gave Eddie draft lyrics of it to approve, he started giving me more compositions. At one concert he announced, “Here’s Song A and Song B until Janice writes lyrics for them.”   All in all, in two short years we were able to create 13 collaborations. We played together often in concerts and clubs while I was there. Eddie Russ was a master of really lyrical “funk and groove” jazz. The Shop will have a dozen or more of our collaborations,  including two other waltzes, “Valse 24” and “Four for Three.” (The sound clip is from “Soul Jazz Records Present Eddie Russ.”) 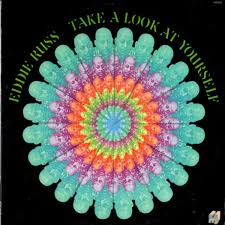 Eddie Russ was a fantastic keyboardist and composer who was gigging in Pittsburgh clubs even as a teenager. He spent some time in New York and California, and after working with a number of legends, including Benny Golson, Sarah Vaughn, Stan Getz, and Dizzy Gillespie, he started his solo career in the ’70s, playing up and down Michigan and beyond. He received many awards and was a sought-after player and teacher. Among his recordings are several albums on Monument. Russ was tremendously popular during his tours of Europe, where his “groove-laden” recordings were big hits. In 1995 a special tribute concert featured his treasured originals and demonstrated the affection held for him as a person. He passed in 1996 due to illness. I miss him.

Be the first to review “All But Blind” Cancel reply