When I got an advance track of this song from his just-released Cascadia CD, Dmitri simply wrote: “lyrics?’ The piece is so much fun, and after a short while, the vignette came to me. The crowd is dancing to the band and as the night wears on: “Some movin’ slow, some holding on, late in the night, when the rhythm can get inside their bones.” And he notices “the girl with that smile” who follows “every note that I play.”
I first met Dimitri years ago when I was doing some freelance journalism in Tucson, including CD and concert reviews and artist profiles. I wrote a profile when he came to perform as a graduate of the University, already touring and making his mark. Whenever he comes back to town, I try to be there. I love his music, his players are always top notch and his manner with the music and the audience is always warm, inviting, and fun. You can tell he loves what he is doing creating truly memorable nights.  I was honored that he was a guest artist on my CD. 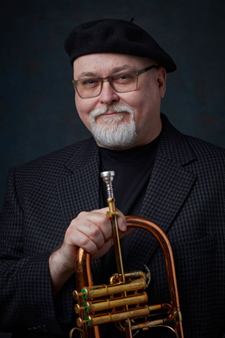 “Dmitri Matheny is a jazz treasure. The lyrical Matheny has impressive chops, but it’s his warmth and soulfulness that win you over.”—All Music Guide. Acclaimed for his warm tone, soaring lyricism and masterful technique, American flugelhornist DMITRI MATHENY has been lauded as “one of the most emotionally expressive improvisers of his generation” (International Review of Music). An honors graduate of the Berklee College of Music, Dmitri Matheny vaulted onto the jazz scene in the 1990s as the protégé of jazz legend Art Farmer. Since then he has garnered critical acclaim and a loyal international following, touring extensively throughout the United States, Europe, and Asia, traveling to 19 countries. With over 100 recordings to his credit, Dmitri Matheny has released 12 albums as a leader. The San Francisco Chronicle calls Matheny “one of the jazz world’s most talented horn players.”

Be the first to review “Evergreen Girl” Cancel reply